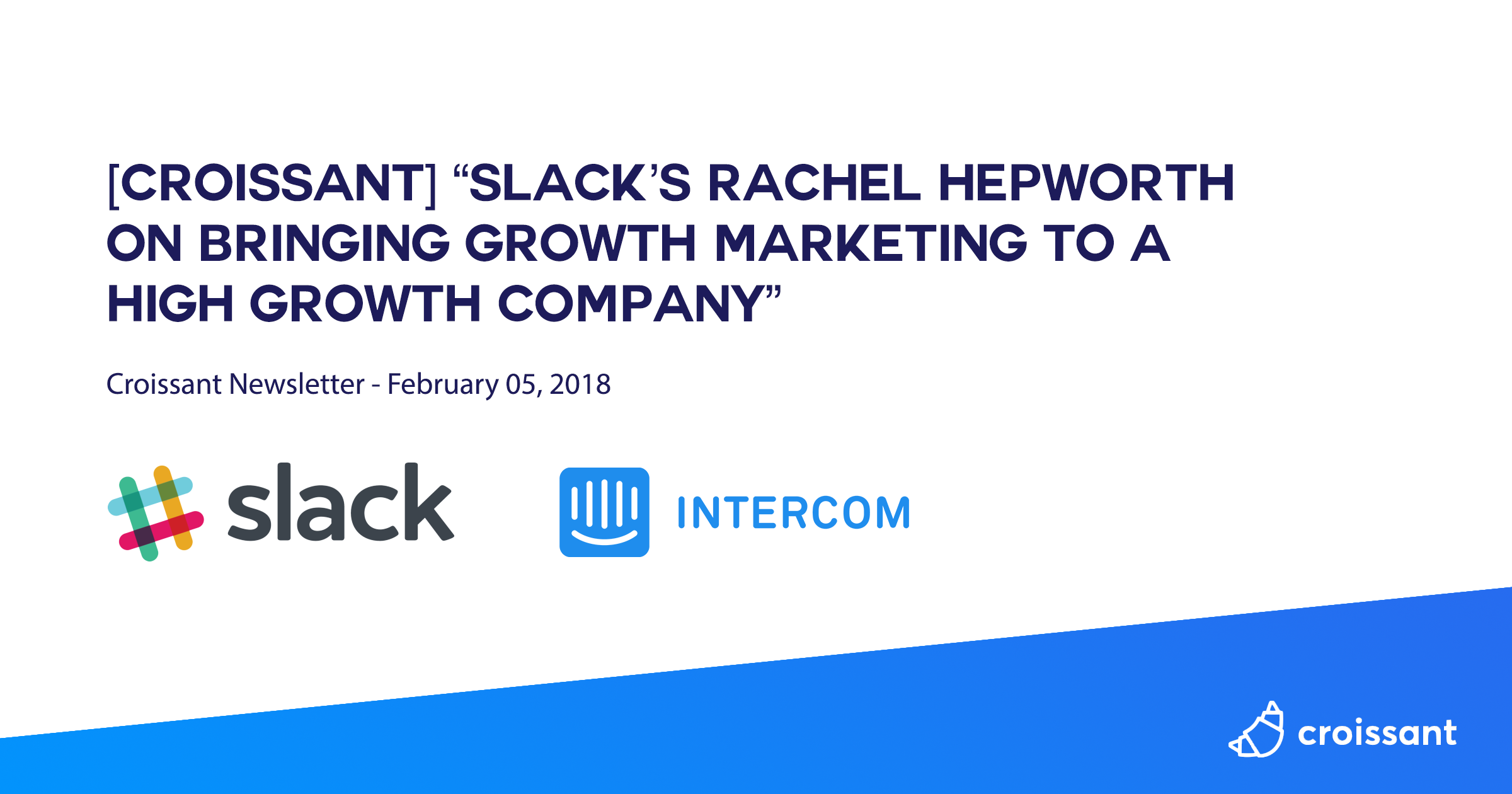 This week newsletter is heavy on Podcast again (as you can have guess by now, I'm a podcast guy) with podcasts from Greylock and Intercom. You will also find a great presentation by John Egan on Pinterest focus on measuring engagement and retention.

PS - I'm in San Francisco this week for SaaStr. If you are around, happy to meet up :)

Resource of the Week

"In August of 2016, Rachel Hepworth embarked on a unique challenge: start a growth marketing team at one of the most successful startups of this generation – one that had long relied heavily on word of mouth.

That company, of course, is Slack, and Rachel’s growth marketing team now owns Slack’s full acquisition funnel, from demand generation and team creation to activation and monetization. I recently hosted Rachel on our podcast to learn why Slack needed to invest in growth marketing, what her team prioritized first, how they’ve partnered with Slack’s rapidly scaling sales team, and more."

"There is no decision that isn’t confirmed by data at Houseparty. That’s why nothing goes by unnoticed or unmeasured. Needles said, “We measure everything. If there’s a tap on the screen, we’re going to measure it.”

Houseparty believes that there should be a metric for any and all interactions. Seemingly tedious and unnecessary, the app considers this an insurance policy against the uncertainty the future brings. Needles warned that with quick pivoting and changes in the market, you will get left behind if you don’t have access to sufficient data to keep you informed. Sometimes the data isn’t useful right away, and that’s OK. Houseparty has experienced many instances where it stored and measured data that it didn’t touch until months later. The significance in the data may not reveal itself immediately, but it may come in handy in the future, so don’t discount anything. "

"Quick Tip 1 Activation boils down to clearly communicating the value of your product. Quick Tip 2 Define one key engagement metric that the company can stand behind and then optimize against that. Every effort must lift key engagement metric. Quick Tip 3 Segment your users, and measure experiment results/metrics for each segment or user group. "

"Are B2C companies starting to see a decline in viral growth responsiveness? That’s what Greylock’s Growth Advisor Casey Winters and Head of Rider Growth at Uber, Andrew Chen believe. Andrew coined the term The Law of Shitty Clickthroughs to describe the idea that every ad channel and every marketing platform eventually sees a decay in responsiveness. Due to increased consolidation and competition, viral growth is now much harder to break through and in the long term will see a break down in effectiveness.

In this episode of Greymatter, Casey and Andrew riff on why consumer growth is getting harder and more expensive, and what viable opportunities companies can leverage in their own growth strategies. Both Andrew and Casey have a deep background in growth. Andrew advises and invests in tech startups including Barkbox, Dropbox and Tinder and for the past decade, he’s written extensively on mobile, metrics, and growth. Before heading growth at Pinterest, Casey ran marketing for Grubhub. Casey and Andrew share actionable growth strategies for startups, current trends in paid acquisition, and why they are excited for the rise of enterprise viral growth. "

"In this chapter we’ll share the story of Gusto, an all-in-one platform for payroll, benefits, and HR serving over 40,000 small businesses. We helped grow their customer base with the help of social ads while they were going through typical B2B SaaS milestones; we’ve reached more than 10 million people over the course of about two years, and served over 26 million impressions.

We’ll also show you our own real-world campaign learnings and dispel misconceptions about social ads with a primer on how they work. We’ll focus on Facebook ads because of their large reach and advanced targeting options, but the high-level principles apply for platforms like LinkedIn as well. "

"Together with industry partners App Annie, Criteo, InMobi and Vungle, Adjust's Complete Guide to Mobile App Marketing is an all-inclusive resource for marketers in every vertical, from beta to first launch to lifetime value. We've now released the first 5 chapters, but sign-up here for future ones!

As a mobile app marketer, you can easily get lost in the intricacies and depth of mobile app marketing. With the help of some of the most prominent players in the mobile ecosystem, we've assembled the Complete Guide to Mobile App Marketing, with the belief that a little support goes a long way in taking your app to the top of the charts. From the basics of user acquisition and App Store Optimization (ASO) to the fine tuning of targeted retention campaigns, every page is straight from an industry leader's playbook on how to make the most of your marketing initiatives. "

"Key App Awareness and User Acquisition Lessons from Spotify - Since its inception in 2008, the Sweden-headquartered music, podcast, and video streaming platform Spotify has done a phenomenal job disrupting the digital media and entertainment industry. As of July 2017, Spotify has over 140 million active users and over 60 million paying subscribers.

In August 2017, it became the most-downloaded music app in the US, with over 100 million downloads on the Google Play Store. The company is now valued at $13 billion. One of the foundations of Spotify’s staggering success is successful app awareness and user acquisition, which drives product visibility and app downloads. How did Spotify accomplish this? "

A weekly email of interesting Marketing & Growth resources for startups

Sorry, there was an error. Please try again to subscribe.

[TGB] What’s next in growth?

[TGB] The Secret to $5 Customer Acquisition Costs on Facebook